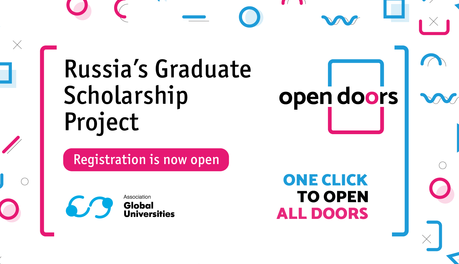 A Master’s degree in Russia? Sign me up! Students from all over the globe can now study for free on a Master’s program at one of Russia and the world’s top universities thanks to Open Doors: Russian Scholarship Project, which has been launched by joint efforts of Russia’s higher education institutions. Applications for the first round of selection can be submitted until February 16, 2018.

Open Doors: Russian Scholarship Project is Russia’s first international competition for prospective Master’s students. The competition is held with the support of the Russian Ministry of Education and Science and the Rossotrudnichestvo Federal Agency; the Association “Global Universities” acts as the organizer. The project is the first to give students from all over the world a unique opportunity to enroll in a Master’s program in Russia without entrance exams and using a single-window system: entrants can choose any one of more than 500 universities in 80 Russian cities, from Kaliningrad to Siberia and the Far East. That includes universities listed in top international rankings, such as Times Higher Education World University Rankings (THE), QS World University Rankings and the Academic Ranking of World Universities (ARWU), as well as 21 leading universities participating inProject 5-100 – a Russian academic excellence initiative aimed at strengthening the position of the Russian education on the global market. Winners of the competition will enjoy early admission and tuition-free education in a university of their liking.

„Russian science and education have always been world-famous. Providing young people from other countries with access to our intellectual potential is what Russian universities can, and must, do for the global scientific and technological progress: we believe this is our mission, and it is above any and all political differences“, says Daria Kozlova, First Vice Rector of ITMO University (St. Petersburg) and head of Open Doors: Russian Scholarship Project.

„In recent years, Russian higher education institutions have made a giant step forward in opening up to the international community: for example, in ITMO University, the share of foreign students grew almost two-fold, and the number of international employees increased more than ten-fold. Leading Russian universities are actively climbing up in global university rankings and proving their competitive ability on the global arena thanks to such initiatives as Project 5-100. We are ready to share our expertise and develop international academic mobility. We want students all over the world to know that the doors of Russian universities are wide open to them“, she concludes.

The competition is open to all foreign citizens, as well as Russian citizens permanently living abroad, who already have a Bachelor’s degree or are completing their Bachelor’s education in 2018. Entering a Russian university has never been simpler and easier: the competition is conducted entirely online, and the criteria are clear and transparent.

To win a position at a coveted university, prospective students must sign up on the project’s website: od.globaluni.ru/en and pass two rounds of selection. The first, qualifying, round is a portfolio contest. Entrants should upload their portfolios online via the project’s website by February 16, 2018. Those who have successfully passed the portfolio contest are invited to the final round, an online test that will be available from March 5 to 15, 2018. The results of the competition will be announced at the end of March: a list of winners will be published on the project’s website. The competition’s tasks are available in Russian and English. Winners can also choose to study at their university of choice in either language.

This year, the competition is held in four subject areas: Mathematics, Computer Science, Economics, and Physics. Winners of the contest can select any program track within a subject area of their choice, and then apply to one or several Russian universities that have educational programs corresponding with the track that interests them. Each subject area of the competition is supervised by one of the prominent Russian universities. Mathematics is curated by the Moscow Institute of Physics and Technology that taughtten Nobel laureates; ITMO University (St. Petersburg), an alma-mater to world programming champions, is in charge of Computer Science; the National Research Nuclear University (MEPhi, Moscow) supervises Physics, and Economics is taken care of by the Higher School of Economics (Moscow). A number of other leading Russian higher education institutions act as co-organizers: theNational University of Science and Technology MISIS (Moscow), Tomsk State University, the Siberian Federal University(Krasnoyarsk), Novosibirsk State University, St. Petersburg Polytechnic University, Immanuel Kant Baltic Federal University(Kaliningrad), the Ural Federal University (Yekaterinburg) and Kazan Federal University.

All the details on how to participate in Open Doors: Russian Scholarship Project can be found on the website: od.globaluni.ru/en.